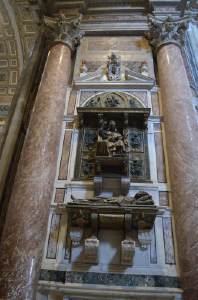 Named bishop of Savona, Italy, in 1467 by Pope Paul II, he was made cardinal in 1473 by Pope Sixtus IV, whom he succeeded. His election was manipulated by Cardinal Giuliano della Rovere (later Pope Julius II), whose tool Innocent remained. The executions of persons thought to be practicing witchcraft were increasing throughout western Europe. In a bull of 1484 Innocent acknowledged belief in witchcraft, condemned it, and then dispatched inquisitors to Germany to try witches. In 1486 he persecuted one of the chief exponents of Renaissance Platonism, Pico della Mirandola, by condemning his theses and prohibiting his defense.

When his call for a crusade against the Turks failed, Innocent made an agreement in 1489 with Sultan Bayezid II to keep Prince Jem, Bayezid's fugitive brother and pretender to the Turkish throne, confined to the Vatican in return for an annual payment and the gift of the Holy Lance, the spear thrust into Christ's body at the crucifixion. Innocent's manoeuvres in Italian politics were equally unscrupulous: he deposed King Ferdinand of Naples in 1489 for failure to pay debts of tribute; and his wars with several Italian states, especially Naples, depleted the papal treasury, which he replenished by creating and selling new posts. Generally regarded as unworthy and of low private morals, Innocent left the Papal States in anarchy.