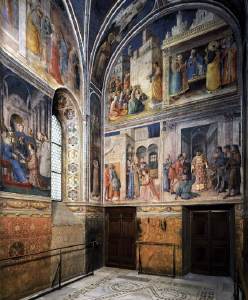 Original name Tommaso Parentucelli (b. 1397, Sarzana,.d. 1455, Rome), influential Renaissance pope (reigned 1447-55) and founder of the Vatican Library. Soon after his election, he brought to an end the schism caused by rivalries between popes and councils. By 1455 he had restored peace to the Papal States and to Italy. He began a program for the rebuilding of many of Rome's architectural wonders, including St. Peter's Church, and became the patron of many artists and scholars. His failure to promote real religious reform, however, helped to bring about the Reformation of the 16th century.

Parentucelli was born in 1397. His father died when he was nine. Later he studied at Bologna, but for lack of funds had to interrupt his studies there. Then, to earn money, he acted as tutor for two years in two wealthy, cultured Florentine families, and this contact with the early Renaissance coloured all his life. After returning to the university and completing his studies, at the age of 22 he entered the household of Niccolň Albergati, the cardinal-archbishop of Bologna, whom he served devotedly for 20 years, accompanying him on his many diplomatic missions throughout Europe.

Pope Eugenius IV recognized Parentucelli's merit and experience and, on Albergati's death, made him bishop of Bologna (1444), but he was prevented from entering the city by its rebellious inhabitants, who sought independence from papal rule. At the Council of Ferrara-Florence (1438-45), he led the discussions with the Armenians, Copts, and Jacobites that attempted to end their doctrinal differences with the Latin Church, and he later journeyed on missions for the Pope. After his diplomatic success in pacifying the German Electors at the Diet of Frankfurt in 1446, he was created cardinal and only three months later, on March 6, 1447, was elected pope. Thenceforward, his chief aims were, in his words, "without using arms other than those which Christ has given me for my defence, that is to say, His Cross," to work for ecclesiastical and political peace, to reform the church, and to make Rome architecturally and artistically the worthy centre of Christianity.

When Nicholas became pope, the remnant of the rebellious Council of Basel (1431-37) - which advocated control of the church through councils rather than through the pope - and its antipope Felix V still challenged Rome. Nicholas, by demanding little and yielding much, brought the schism to an end. He restored peace in the papal states, not by mercenary armies, which he disbanded, but by strategically situated castles entrusted to carefully chosen governors. In Rome he was conciliatory with the nobility and granted concessions to the restive citizens. He allowed the town of Palestrina, destroyed by his predecessor, to be rebuilt; pacified Bologna by granting it virtual independence; won the allegiance of Poland by concessions; and, by promising coronation as Holy Roman emperor to Frederick III, gained the support of Austria. In order to give peace to Italy by preserving the status quo and to organize a crusade against the Turks, he initiated the Peace of Lodi among Venice, Milan, Florence, and Naples and solemnly ratified it on Feb. 25, 1455.

Nicholas helped the church by furthering legislation against the old abuses of simony (buying and selling of church offices) and clerical concubinage and by encouraging bishops to govern their dioceses wisely. In Germany Cardinal Nicholas of Cusa (1401-64), a notable scholar and thinker, and the Franciscan theologian and preacher, Saint John of Capistrano (1386-1456), laboured hard at reform with much success. A wider measure to stimulate piety and restore the papal reputation was the proclamation of the 1450 Jubilee Year. Vast numbers of pilgrims visited Rome, and the project did much good, though it was marred by an outbreak of the plague and a tragedy when 172 people died in a panic-crush on the Ponte Sant'Angelo.

Pope Nicholas is best remembered for his influence on the Renaissance in Rome. He had plans for building a new St. Peter's Church but was able only to rebuild what was crumbling, to reconstruct the Vatican Palace, and to surround the whole with a wall. The restoration and embellishment of many Roman architectural treasures, such as the senatorial palace on the Capitoline Hill, are credited to him, but he pillaged ancient monuments to quarry materials for his new constructions. At his initiative, Rome became a centre for goldsmiths and silversmiths; he employed French, Belgian, and German tapestry makers; and he commissioned artists of note, among them the great Florentine painter Fra Angelico (1387-1455), to beautify his constructions.

He had the Humanist's passion for books. On his diplomatic missions he sought them out, and as pope he spent vast sums on buying them; he also founded the Vatican Library. His court became a centre for Humanists, some of them more pagan in outlook than Christian; they were employed in copying and translating ancient texts, among them the works of Homer, Herodotus, Thucydides, and many Greek Church Fathers.

His last years were saddened by a plot against his life. Twice he dealt mercifully with the ringleader; the third time, in 1453, he had him and his accomplices executed. Also in 1453, Constantinople, the seat of Eastern Christianity, was captured by the Turkish sultan. Nicholas had ordered a fleet to aid the beleaguered city, but it arrived too late. This was a military reverse of great religious and cultural significance.

Nicholas was a man of gentle character who achieved more by wise concession than others did by force. Of him Vespasiano da Bisticci (1421-98), the biographer of 15th-century luminaries, wrote: "He did not know what avarice was: indeed, if he retained anything of his own, it was simply because no one had asked him for it." His diplomatic efforts on behalf of peace in Italy and elsewhere and his patronage of the arts, especially of literature, restored to the church much of the ancient prestige it had lately lost. His failure to promote sufficiently religious reform, however, was destined to result in the Reformation in the 16th century.